Get our monthly newsletter that brings you news and tips from Rock House Financial. 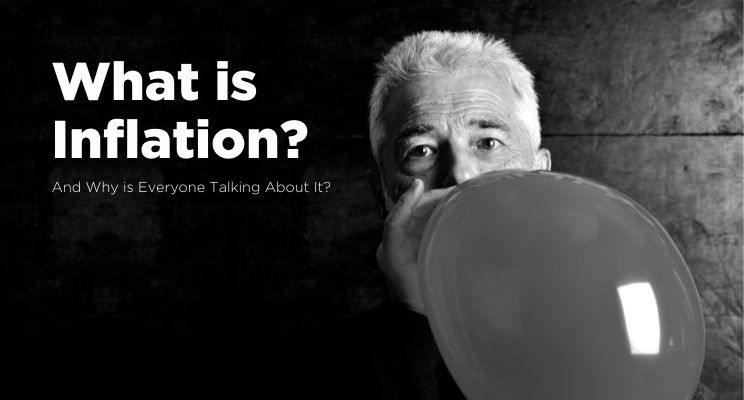 What Is Inflation – And Why Is Everyone Talking About It?

Climbing commodity prices, ambitious government spending packages due to the COVID-19 pandemic and the subsequent economic crash have resurrected a long-dormant fear: Runaway inflation. But what is inflation, and is it something to worry about? A lot of the thinking surrounding inflation has changed over the years, and economists disagree on what causes it and how much weight the federal government and Federal Reserve should give it when it sets fiscal and monetary policies. Here’s a closer look:

Inflation refers to a general increase in the price of goods and services, which means each dollar in your pocket has less and less purchasing power over time.

Some amount of inflation is normal. The price of coffee, for example, rises steadily, and we expect it to continue. In fact, most economists say a small amount of inflation is necessary. If an economy isn’t already using all of its labor and resources to produce as much as it can, then a little inflation theoretically boosts productivity. That’s because more money spurs more buying, and more buying spurs more production. The Federal Reserve, which is responsible for U.S. monetary policy, has targeted an annual inflation rate of 2 percent.

However, high inflation, which causes a rapid devaluation of currency, creates economic problems for households and markets, including:

The Federal Reserve often tries to curb inflation by raising interest rates, but doing so comes with its own economic consequences. Namely, the cost of borrowing rises, leaving consumers with less money to spend. In return, businesses lower prices to attract buyers. Though this can slow inflation, a drop in consumer spending can also slow down the economy, perpetuating one of the negative effects of runaway inflation.

Should We Worry About Rising Inflation?

As the economy reopens, inflation has shot up. Economists disagree over whether that’s cause for alarm. That’s partly because the last few decades have challenged the conventional wisdom on inflation.

Low unemployment rates have historically been associated with high inflation, although this link began to deteriorate in the late 1980s. And following the Great Recession, inflation remained almost obstinately stable against fast jobs gains. While some economists see big government spending, low interest rates and hordes of post-pandemic American consumers eager to spend as a recipe for disaster, others are less concerned.

The reasons they give are varied. Stable inflation over the last few decades may signal that central banks have mastered monetary policy, making it less likely in general for inflation to get out of control. Perhaps the current spike in inflation will be a temporary issue, as the economy snaps back to pre-pandemic levels of activity. Some argue that even if high inflation represents a real economic risk, the risk of keeping so many unemployed and without economic relief is far greater.

Inflation is a fact of modern economic life. When it’s kept below a manageable threshold, it can be a good thing. It’s hard to predict what the economy will look like as a patchwork of countries begin opening back up. However, you can expect that inflation will remain a hot topic of discussion as the economy finds its new normal.

What Happened to the Phillips Curve in the 1990s in Canada? (bankofcanada.ca) (includes U.S. information)

The Fed – Why does the Federal Reserve aim for inflation of 2 percent over the longer run?

Locally owned and independent, Rock House Financial is passionate about helping you create a more confident financial future. We are fiduciaries who offer fee-only financial planning, investment management and tax strategies to help you minimize financial stress and achieve your goals.

Advisory services offered through RH Advisors, LLC dba Rock House Financial, a registered investment advisor. Information presented is for educational purposes only and does not intend to make an offer or solicitation for the sale or purchase of any specific securities, investments, or investment strategies. Investments involve risk and, unless otherwise stated, are not guaranteed. Be sure to first consult with a qualified financial adviser and/or tax professional before implementing any strategy discussed herein. Past performance is not indicative of future performance.

Certified Financial Planner Board of Standards Inc. owns the certification marks CFP®, CERTIFIED FINANCIAL PLANNER™, CFP® (with plaque design) and CFP® (with flame design) in the U.S., which it awards to individuals who successfully complete CFP Board's initial and ongoing certification requirements.